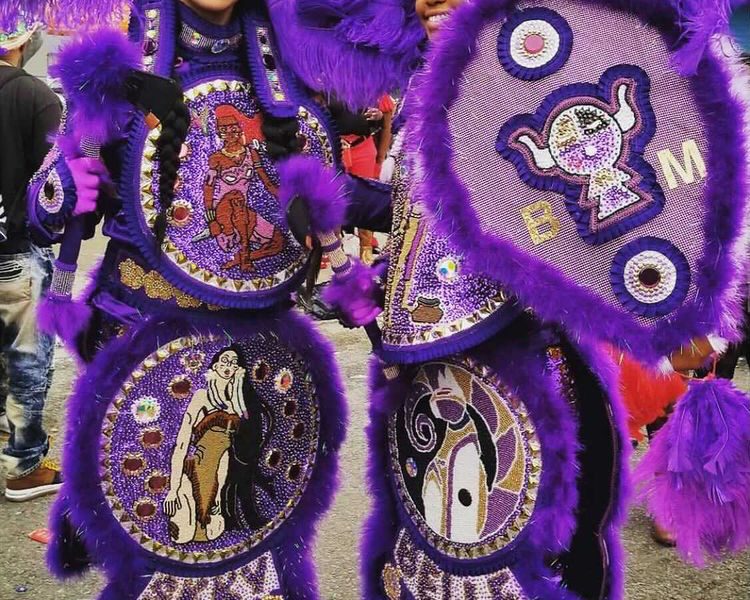 The annual Mardi Gras holiday in New Orleans comes with the expectation of beads, costumes and funky floats.

Unless you decide to venture off St Charles and Canal Street and walk a mile through the Uptown New Orleans neighborhoods, the chance of seeing a tribe of Black Masking Indians is low.

“The Indians are not on a schedule, nor are they on a fixed route,” said Bobbi Mannino, director of the Mardi Gras New Orleans website. “They have their own celebrations that are totally separate from what’s happening on the main parade route.”

The African American tradition of ‘masking Indian’ through elaborate suits began 200 years ago in remembrance and respect to the Native Americans who helped them. The tribes have been celebrating this way, even when the law prohibited their participation.

“I consider this tradition to be one of the first-ever civil rights movements,” said Big Chief Brian, leader of the Guardians of The Sun tribe. “When black men came out on Mardi Gras, hundreds of years ago, it was as a protest. Some went to prison and died at the hands of white cops because blacks were not allowed to participate in Mardi Gras.”

Each tribe has positions among its members. There is a Big Chief, Big Queen, Spy Boy and Flag Boy – each role holds an individual responsibility in the tribe.

Since the 1980s, the suits began to exhibit African folklore and spirituality.

The Guardians of The Sun tribe was the first to incorporate African spirituality into the Native American suits.

“This culture is our West African retention,” said Big Chief Brian. “After being taken into this country as slaves, they tried to take our culture away from us. But guess what? It survived. And it’s right here.”

“Masking has always been to pay homage to the Natives who helped African slaves during the civil war,” explained Chief Brian. “But in attempting this, Natives were depicted on suits with blood-red skin; it was offensive.”

“So, in the 1980s, our tribe was the first to connect the Native Americans to the Motherland,” he continues. “The difference between them back in the day and us now, is that while they were masking, we are unmasking.”

Suits can reach up to 7 feet and weigh 120 pounds.

For the African Americans celebrating Mardi Gras this way, every suit is a hand-sewn display of artistry incorporating Native American and West African history. Each suit is an extension and projection of ancient West African spirituality.

“We as Uptown Indians mask two-dimensionally. We sew on canvas to depict a story,” said Big Chief Brian. “My group, in particular, like to sew social justice stories on our suits, or stories of African spirituality and folklore.”

The ultimate compliment for an Indian on Mardi Gras day is to be called pretty. Steve Austin, the Flagboy of the Black Mohawk Mardi Gras Indian tribe explains.

Individuals begin working on their suit the day after Mardi Gras, and some can take up to two years to complete.

There are multiple components to every suit: the crown is the elaborate headdress worn by the Big Chief; the dickie spans the torso area and displays the artistic story that has been hand-sewn onto it; the apron (often made of canvas) covers the waist to the ankle.

Spending two to six hours each night sewing, Uptown Indians use ceramic or plastic beads, dental floss, fishing wire, rhinestones and ostrich feathers as primary materials. This is not just preparation for a one-day event; it’s a lifestyle.

“We get together at one person’s house, we sit and sew and BBQ,” he said. “My group would previously get together every other week. Since the pandemic started, we kind of separated from that. But hopefully we can soon get back to sewing again.”

The spiritual connection with the suit develops throughout the creation process. From brainstorming ideas to sewing the first few patches, the relationship with the suit builds until it is finally time to wear it.

“When you put on your suit, it’s a spiritual thing. You feel everything you put into your suit through sewing,” said Steve Austin. “With the endless hours you put in, you’re putting blood, sweat and tears into it. You’re sewing and pricking your fingers, and, by the end, there is literally blood ingrained in the suit.”

Most people who participate in the Mardi Gras Indian culture are working-class, blue-collar citizens of New Orleans. But it is an expensive lifestyle that requires dedication and spending if you want to be the prettiest Indian.

“Everybody has their own way of masking. Growing up, I was taught to think every Indian is pretty,” said Chief Bo Dollis. “But if you’re only spending $200 on your suit, you’re going to look like $200. Consider that some suits can add up to $10,000 by the end of the year; it shows. The more work you put in, the more you sew, the more it costs.”

After Mardi Gras day, the suits are never worn again (with Super Sunday being an exception). There is a reason for this, and it lies in tradition.

“Back in the day, suits would consist of broken glass, bottles, chicken, turkey, duck feathers and shiny scales,” said Steve Austin. “So the next day, you’d need to burn it; otherwise it would rot.”

Although the materials used nowadays are mostly synthetic, this tradition lives on. Instead of burning, suits are usually thrown away or kept in storage.

Big Chief Brian emphasizes the significance and symbolism attached to the suits and the culture it belongs to.

“We have managed to keep part of the culture that they tried so hard to extract from us. We kept it, and they don’t even realize it. Many of the people who participate don’t even know it. Our people are resilient.”